An area for all you bikers who now run your two wheeler on battery power, scooter owners to.
Post Reply
25 posts

I've been working on converting a 1986 Yamaha RD50MX for the past few months. I bought the bike as a couple of large boxes of bits, with lots of key parts missing, as it turned out. The best bit about this box of bits was that the frame was straight and it had a valid V5.

I spent the first six weeks getting the frame and parts bead blasted and painted, rebuilding the front forks, brakes and wheel bearings and generally getting the thing to the rolling frame stage.

Next up was the fitting of a Mars Electric LLC ME0709 motor, which turned out to be pretty easy. BTW, I'd highly recommend John Fiorenza at Mars if anyone is after a motor in this power range (up to 72V, around 150A max). He's a great guy to deal with and went out of his way to sort a shipping problem for me very quickly. The pictures below show progress on the bike so far: The next challenge was to get some suitable batteries. I opted to use 64 off Headway 38120 10Ah LiFePO4 cells, wired as a 16S, 4P pack. Having put my faith in the ability of banks to transfer large sums of money around the globe, I was comforted to find that a very large box of cells arrived all the way from China just a few days after placing the order. Here they are, just as I opened the box:

To make the battery pack up I needed to find a way of connecting these cells together. This meant building a capacitor discharge welder, to weld nickel tabs between the cells. Ebay was a useful source for 15 ex-computer power supply, 97,000uF, 20V, low ESR capacitors for a few pounds, plus a box of very large thyristors (I still have a few of these left over). The thyristors are good for a peak current of about 4,000A, so are robust enough to take the welding pulse current.

Here's a pic of the capacitor bank and thyristor, all hooked up: The welder needed a bit of work to sort out an electrode holder and a box to hold all the bits, plus I had to make a suitable adjustable power supply to charge up the capacitors. Here are a couple of pics of the finished Mk1 welder: I'm currently making up battery housings and sorting out the best place to mount the controller (an Alltrax AXE4834). I'll post an update as I get things sorted.

Hope this stuff is of interest!

It most certainly is of interest Would you care to write an article for me for Plugged In. I'd love to include it

I'd be happy to scribble something once it's a bit more complete.

Tonight's exercise was completely rearranging the batteries, as the original plan just looked too ugly! One snag with doing a small bike is the lack of space to put cells. It's the reason I opted for the cylindrical Headway cells rather than Thundersky ones. I think the Thundersky cells might have been slightly better, but they would have been harder to mount neatly.

I've been trying to avoid dividing the pack up into too many small sections, but have ended up with three sub-packs where the tank used to be and one large sub-pack right above the motor. Hopefully I will be able to build some suitable bodywork to neaten it all up.

Ooo, look at that, proper engineering!

Something I've fought against for years is what my American friends would call the 'Travelling Science Project' look.

I'm hoping that all the arrangements come together and another Gilera CX (see New Donor) as a rolling chassis, will be arriving from Germany later this month. Then it's a case of working out how to afford an AGNI race motor and the biggest Kokam pack I can squeeze in. For what I have in mind I need lots of energy density as well as adequate power.
Paul

Very neat. A bike like that has the big advantage of lots of space for batteries without worrying about making up neat looking boxes for them.

A chap in Brighton (Steve, or Jozzer on some of the other EV related forums) has done a neat job on an Aprilia 125, which has similar advantages to your Gilera.

Out of interest, did you have much hassle with the DVLA? They are making me jump through hoops. I sent the V5 in with the new motor number, change of motor type and change of fuel details and got a letter asking for the cc of the new engine, an engineers report from the garage that fitted etc.

I wrote chapter and verse back, including full details of motor power curves, battery voltage, controller limits, gear ratio, the receipt for the motor and a full technical report on the conversion, only for them to write back to me asking for the cc of the motor yet again.

I wrote again, restating that it was now an EV, so didn't have a cubic capacity, only to get yet another letter saying they couldn't change the details without having written confirmation of the engine cc..........

They've now handed things to the local licensing office, who have been very helpful. They're sending a chap out to do the inspection the week after next. Having told him on the phone what I'd done, and the saga so far, he didn't seem phased at all, he just said that if he looks at the motor serial number and bike frame number it'll keep Swansea happy.

The DVLA as an organisation are a complete......

[the following rant has been removed for reasons of language, decency, and the local strategic arms limitition treaty]

and they can go stuff it where the sun doesn't shine (the small Welsh village of Pant Y Gyrdll).


Honestly, they make it all up as they go along. For over 20 years they've been recording Italian type approval numbers as frame numbers, not believing that the frame number is the one only five digits long. Then they complain about all the Italian bike registered with identical numbers!

The local Luton office was busy and helpful, so they shut it. But before they did so, I registered a Cagiva Freccia conversion. I had to trailer it to the yard of a local dairy farm where a man wrote down the wrong frame number (as above) and had to be told to confirm the fuel type and taxation class, which was the reason for the inspection.

Have you ever seen the film Brazil?
Paul

I've not seen the film, but did once go out with a girl who lived next door to where Terry Gilliam was staying back in the late sixties/early seventies, does that count?

A colleague recently visited DVLA in Swansea to look at their customer management system. They are very proud of the fact that they've centralised everything and brought the waiting time for routine registration changes down to less than six weeks.

The snag is that they have dismantled the local offices, who in my experience (having built two kit cars and having a personalised plate that needs transferring every couple of years) were really good. Thankfully the incompetents at Swansea have now handed my job back to the local office who are being very helpful indeed.

Of course, part of the centralisation process has meant that they refuse to allow you to call the local office. Luckily the chap at my local office has just given me his mobile number, as he recognises that the centralised system is pants.

Bikes looking great, just had similar trouble getting insurance! Where
about's are you, and thank's for advice on my new EV, it's a relief to
know people are willing to help. 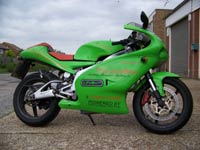 Mines been pretty easy to register/insure, though the insurance premium could have been cheaper! (footman James)

I wrote to DVLA and enclosed v5, a printout of motor specs, and a letter from a motorcycle mechanic explaining that the vehicle had been converted with no alterations to the suspension and was safe to drive.
They wrote back to tell me that I needed to go to a DVLA office to get a tax disk, then the vehicle could be registered. After a 15 minuit wait, someone checked the paperwork, and issued a free taxdisk. 2 weeks later the finished V5 arrived from DVLA.
I've got 2 more bikes to convert here, I hope they will be as easy!

THose Gilera cx look great for conversion EVGURU, shame theres not more of them around:(

Great work on the spot welder Jeremy! How did you find the right settings for welding. Was it trial and error or did you have some reference values to work from?
Top
Post Reply
25 posts

Users browsing this forum: No registered users and 3 guests